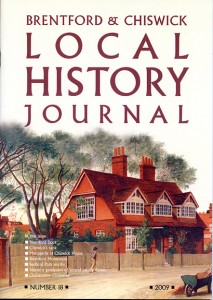 Chiswick’s tank
by David Fletcher
The story of the WW1 tank awarded to Chiswick in recognition of their fund raising for the war effort.

Some Bedford Park myths and misunderstandings
by D W Budworth
The author examines and corrects some of the mis-statements about Bedford Park’s origins and layout.

Some nursery gardeners of Strand on the Green
by Val Bott
The story of three gardening families, the Masters, the Parkers and the Woodmans.

Thomas Harriott: the First Man to Map the Moon
by Carolyn Hammond
A note on the 400th anniversary of Harriott’s achievement