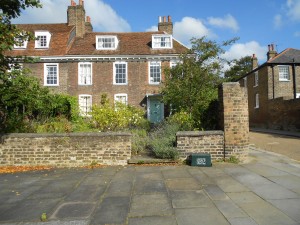 An enquiry seeking local history information has led to the discovery through local directories that for 30 years in the 19th century Rutland House in The Butts was a Ladies’ Academy run by Miss Celia Sims.

The 1881 census shows that by that date Miss Sims was 60 years old and had been born in St James’ Westminster. On the night the census was taken other residents of the house were two adults described as boarders, two local children called Gomm, a teacher, a cook and a servant. Their next door neighbours were Evan and Emma Phillips who were both described as ‘certified teachers’ from Wales; they lived with their two young sons and a domestic servant. We do not know whether they taught at Rutland House or whether it is just a coincidence that they had moved there.

The Ladies’ Academy closed the following year and the Phillips moved from The Butts to become teachers at the British School (more commonly known as the Rothschild School) in Brentford High Street. Evan Phillips became a Justice of the Peace and local Councillor. He was the Chairman of Brentford Urban District Council in 1909 when the Brentford Monument was erected near the Ferry; this now stands outside the County Court near the site of his school. In 1921 the local newspaper reported a concert, an address by Leopold de Rothschild and other local dignitaries, and a presentation of a wallet containing £100 to Mr Phillips when he retired after 40 years as Headmaster of the Rothschild School.