Barkers Rails was the name used for the starting point for the Oxford and Cambridge Boat Race at least once, in 1856, and was also used, apparently regularly, for ordinary rowing races. Its whereabouts has long been something of a mystery although its derivation seems plain enough as coming from the Barker family who owned a very large amount of land in the parish until the early part of the 18th century. Their house was The Grove near the river, later known as Grove House (demolished 1928).

However, a clue to the mystery was first discovered in some documents at Chatsworth in the papers of the Dukes of Devonshire. These papers were a record in 1809/10 of a disagreement between the Duke’s agent, a Mr Bromehead, and two men, Thomas Humphreys and Bruton Sangster, one a lighterman and the other a barge builder, who had been given leave by the Steward of the Manor of Sutton Court to occupy some land on the banks of the Thames, said to be manorial waste and so not owned by anyone except nominally by the lord of the manor. A lease drawn up for Sangster and Humphreys says that the land in question ‘commonly called Barkers’s Rails’ was at Strand on the Green ‘on the south side of the road leading from Chiswick to Kew Bridge’. In a survey of the land it is described as being about 350 feet long and 140 feet wide at the east end, diminishing in width as it went west. The problem with this situation, as Mr Bromehead saw it, was that the land belonged to the Duke whose land went down to the low water mark. Mr Bromehead was seriously annoyed, commenting in a letter that the Steward would ‘have sacrificed any person’s property, so he got his fees’. The fact that this letter was written on Christmas day may be a measure of his annoyance.

Various sketch maps accompanying these documents show where this piece of land was situated; of these the map (below) when used in conjunction with the others is the most helpful. It is clear from these maps that the ‘Barkers Rails’ referred to was the triangle of land on the other side of the lane to Kew Bridge just across from Mr Pearson’s garden. We know from another document at Chatsworth that a John Pearson rented Strand Field and had a house there and this field may be seen on the Peter Potter map of 1818. The triangle of land may still be seen on the OS map of 1865. That this triangle of land was that called Barkers Rails in 1809/10 is confirmed by the fact that it is stated to be next to the gate to Lady Frances Elliott’s house, that is, The Grove. Lady Elliott was not in fact the owner of The Grove at that time. She had been the owner in the 18th century, but was frequently used as a reference owner in legal documents. 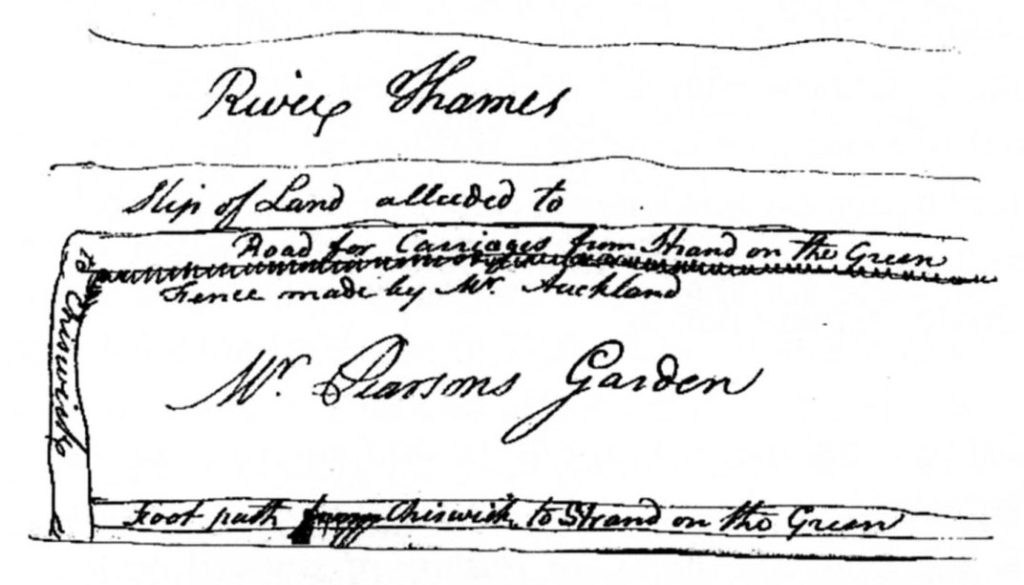 Map drawn at the end of Bromehead’s letter, 25 Dec 1809. The road on the left marked ‘To Chiswick’ is Burlington Lane and Pearson’s Garden is Strand Field

We thus have a piece of land known in the early 19th century as Barkers Rails. Strand Field, with which this piece of waste land was contiguous was part of the original Barker estate and perhaps at one time the field had railings between itself and the road to Strand and Kew Bridge and the name Barkers Rails became transferred to the waste. The Barker family may have had railings along the Thames where their lands bordered the river and indeed railings are shown around the gardens of the Grove estate in Samuel Leigh’s Panorama of the Thames of about 1830. These railings necessarily stop at what appears to be Burlington Lane where it came down to the river.

MAP
Map drawn at the end of Mr Bromehead’s letter, 25 December 1809. The road on the left marked ‘To Chiswick’ is Burlington Lane. Strand Field is the piece of land marked ‘Mr Pearson’s Garden’.

None of this explains how rowing races could start or finish there, as a race requires a single starting point. Fortunately however a 19th century history of the Boat Race tells us that the 1856 race was rowed from ‘Barkers Rails, just opposite the third towpath bridge above The Ship (in Mortlake), almost exactly fronting it on the Middlesex shore stands a brick and stone pedestal. From this point to The Ship is some three minutes rowing on an ebb and the extra distance thus added to the usual course may be set down at about three quarters of a mile’. Three quarters of a mile from The Ship brings us approximately to where Burlington Lane came down to the river and this is opposite a small bridge carrying the path over a stream on the 1865 Ordnance Survey map. The 1830 Panorama also shows a bridge opposite Burlington Lane on the Surrey bank but there is no sign of a pedestal of any kind. Finally, the 1865 Middlesex Directory, under Chiswick says that at the western end of The Grove, ‘projecting into the river, formerly were Barkers Rails, so called from a former owner of the estate and well known as the terminating point of the Oxford and Cambridge rowing matches.’

All of this evidence seems to show that the Barkers Rails known as a point at which races started or finished was where Burlington Lane, having gone past the Grove, ran down to the Thames and that the name itself, given to a small
piece of land bordering the river by 1809/10, arose from railings or a fence alongside at least that part of the land of the Barker family now occupied by the houses to the south of Grove Park Road.

Peter Hammond is the editor of The Complete Peerage and co-author with his wife Carolyn, of Chiswick (1994) and Brentford (1996), both in the Old Photgraphs series, and Chiswick Then & Now (2003)